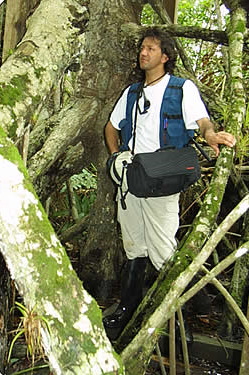 Alfredo Pastor is well known in South America for the video documentaries he has filmed and produced for Latin America Television, headquartered in Quito, Ecuador. Alfredo began his career in television in 1988. He joined LATV in 1990 and has produced over 200 documentary reports for "LA Television." Similar to "20-20", this weekly prime-time program is ranked number one in Ecuador. His work for LATV, and as a free-lance photojournalist, has taken him around the globe.

An award winning professional, he is a recipient of the prestigious CANDEAN Award for Medical Reporting in Caracus, Venezuela. An advocate for ecology and the environment, he has worked in the Galapagos Islands for The Harvard Museum, The Darwin Foundation and currently - for The Mangrove Garden Foundation, founded by Bill and Carolyn Stutt. His work takes many forms ranging from the artistic and ethereal to the tragic, it portrays life's joys, heartbreak and sorrows. Alfredo is passionate about everything he creates and, in particular, the wonders of nature.

His photographs have been published in South America, Spain, South Africa, England and the United States. In February 2002 his photos were used extensively in an article written by Ann Taylor about The Mangrove Gardens at Carwill Oaks for Vero Beach Magazine. Alfredo has worked diligently with various groups around the world and in January 2002, donated one of his photographic works, depicting phaleanopsis orchids in the Mangrove Gardens, to the Indian River Memorial Hospital Foundation for their Wine Auction