This event was the brainchild of the Environmental Learning Center, a non-profit nature center located on an island in the Indian River Lagoon on the east coast of Florida. Funding was provided by the A&K Global Foundation and the Mangrove Garden Foundation of Vero Beach, Florida.

This program, the first of its kind, was founded on the beliefs that as local communities continue to develop, the need for preservation of natural amenities increases. Government officials make decisions, sometimes on a daily basis, that ultimately change the functioning of ecological systems. Yet, in most cases, these government officials come from entirely unrelated backgrounds; their expertise is not necessarily in ecology, land use planning and the natural sciences.

Upclose & Ecological was designed to update the knowledge of these planners and decision makers, the people on the front-lines, making the hard decisions related to critical issues such as storm water management, future development, road widths and tree preservation ordinances.

This event took place on October 11, 2002 on the Environmental Learning Center's 51-acre campus and began with a brief overview of Indian River County's native ecology. 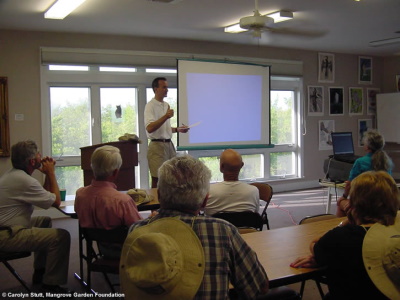 Participants were broken into small groups, assigned lecture leaders and taken outdoors into the Indian River Lagoon and its mangrove wetlands for a morning of hands-on learning. The following photographs depict just how 'hands-on' these activities were. 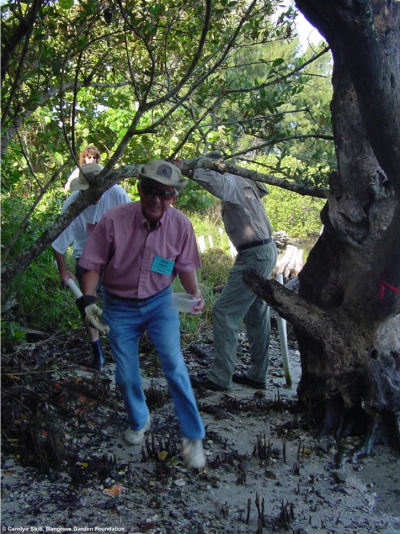 Officials make their way through the mangrove fringe to the shores of the Indian River Lagoon. 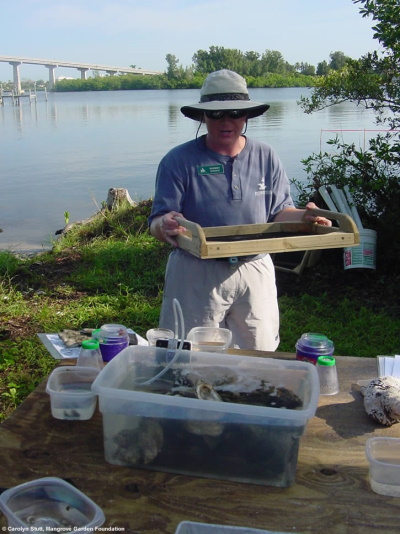 Preparing to sample the sediment of the Indian River Lagoon, an ELC instructor demonstrates the sampling technique to be used. 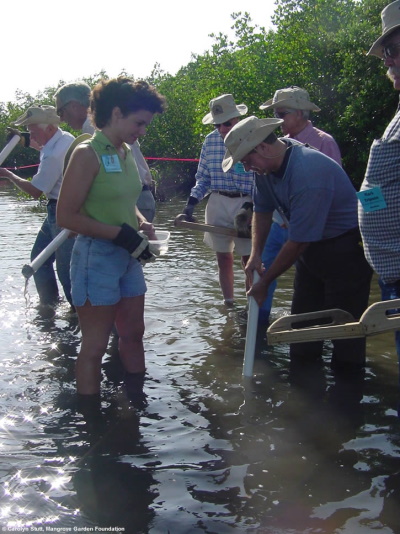 Using PVC pipes for obtaining core samples of sediment and screened trays as sieves the search begins for life at the bottom of the Indian River Lagoon. 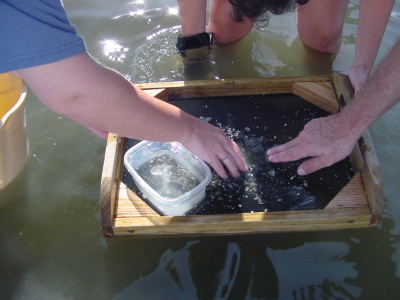 Core sample of sediment being rinsed in screened tray. 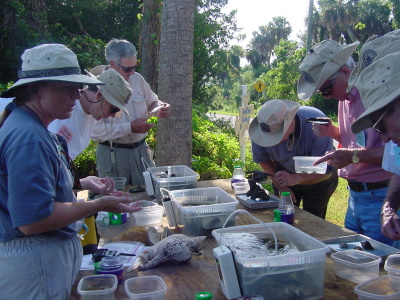 The search productive, the ELC instructor talks about the life forms found in the sediment of the Lagoon. 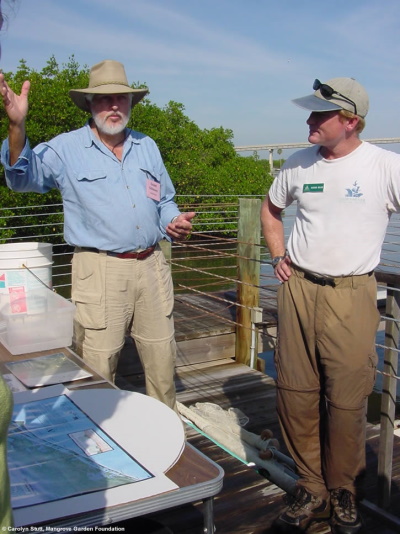 Moving on from core sampling of sediment, the groups take on seine netting to learn first-hand what species of fish inhabit the lagoon. 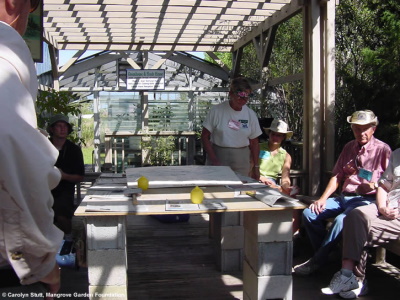 Seated outside the mangrove propagation greenhouse, this group has an opportunity to rest, dry out from their 'close encounter' with the brackish waters of the Indian River Lagoon and learn more about the importance of the mangrove wetland eco-system. 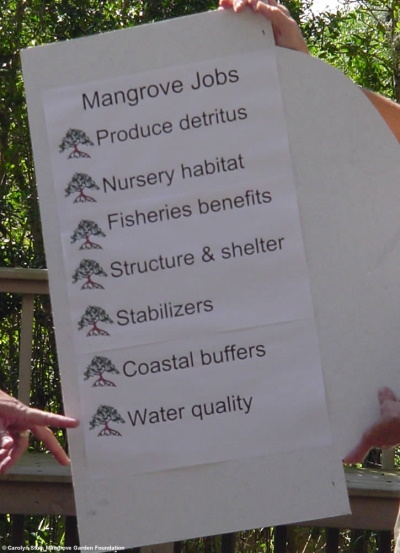 To aid participants in appreciating the importance of the mangroves, the presentation board pictured above was used to succinctly list the many jobs of the Mangrove. Simply put, the mangrove fringe, forests and wetlands provide a continuing source of organic debris that is broken down in the brackish water of their habitat producing detritus, a nutrient rich sediment found on the bottom of the tidal mangrove basins, lagoons - wetlands, it is this 'soup' which makes up the base of the food chain. The roots of the mangroves provide nursery habitat for marine life; their prop roots, branches and tree-like structures provide shelter for indigenous wildlife; their root systems stabilize land and prevent coastal erosion; the mangroves act as coastal buffers during storms; and, using their roots as filtration systems, they improve water quality. Mangroves are truly botanical wonders' worthy of preservation. 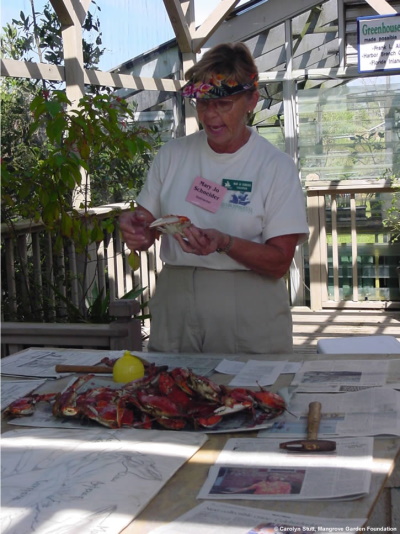 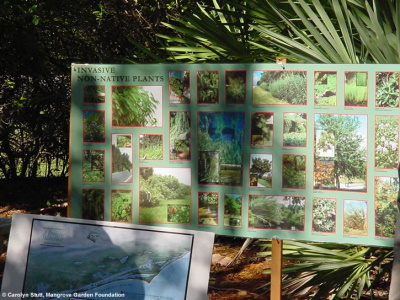 The board shown in the above photo depicts Invasive/ Non-Native Plants that crowd out the mangroves and compete for their habitat. Plants such as the Brazilian Pepper Tree and the Australian Pine were discussed and emphasis was made on the need for removal of all invasive species so that the native plants, i.e. mangroves can continue to thrive. 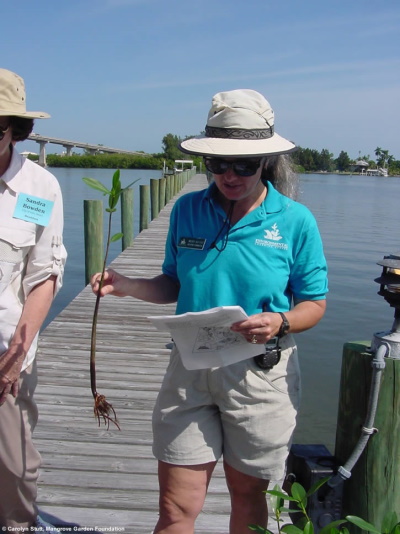 The final phase of the morning's activities was a 'close encounter' with a red mangrove seedling, propagated in the ELC's greenhouse, it was destined for planting in the shoreline of the Indian River Lagoon as part of an on-going mangrove restoration project being conducted by the ELC. 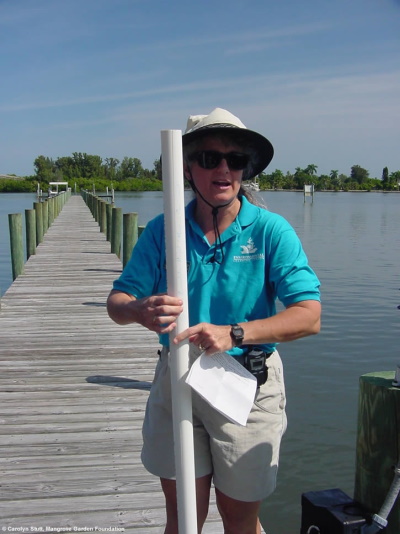 The PVC pipe in the instructor's hand has been scored lengthwise and will be used to protect the mangrove seedling from tidal surges, wind driven waves and the wakes of marine craft that use the Intra-Coastal Waterway (ICW) which runs through the Indian River Lagoon. When the seedling has established a viable root system and is able to sustain itself against the wave action created by marine craft in the Intra-Coastal Waterway, by wind and by tide, the PVC pipe will be removed.

The Intra-Coastal Waterway - What is it? and Why was it Created?

The ICW - the Intra-Coastal Waterway - is approximately 3,000 miles long. It is comprised of both natural and artificial (man-made) channels which provide sheltered passage for commercial and leisure boats along the Atlantic coast of the United States from Boston, Massachusetts to Key West, Florida and along the coast of the Gulf of Mexico from Apalachee Bay, Florida to Brownsville, Texas on the Rio Grande.

Construction of this in-land passage was authorized by Congress in 1919 and is maintained by the Army Corps of Engineers. The Indian River Lagoon was dredged as part of this project in order to provide the deep channel needed for commercial shipping. Soil from that dredging operation was used to create what we know today as spoil islands. Aerial photos taken in the early 1950's by the Mosquito Control District show these 'spoil' islands as barren piles of hard packed white sand, the only vegetation visible is along the islands' edges where mangrove seedlings have opportunistically settled, rooted and begun to stabilize the soil. Today these islands are rich with mangrove growth, provide habitat for marine species, birds and other wildlife. While heavily trafficked by leisure crafts and large yachts, the ICW is still used for commercial shipping, barges can be seen regularly, hauling petroleum, foodstuffs, building materials and manufactured goods.

Approximately 4 months prior to this event, invitations were sent out to the Indian River County's elected and appointed officials. Each official received a mangrove seedling to nurture and return to the ELC on October 11, 2002, the date for the 'Upclose and Ecological' event. As you can imagine, the results of this experience were varied , some were highly productive, some were struggling for survival. This task was, perhaps, not as rewarding as each official had hoped, but the challenge of raising a mangrove seedling was, indeed, a highly personal and educational experience. 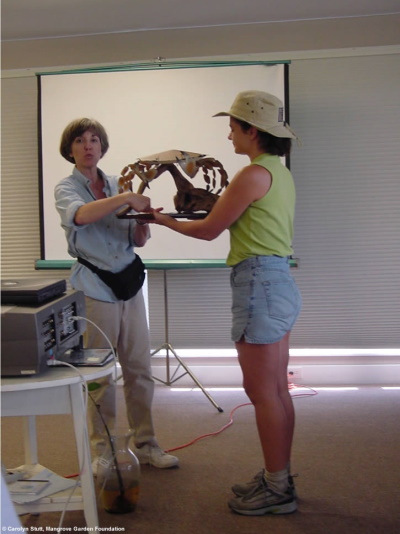 Following a luncheon discussion of the day's activities, the Executive Director of the ELC, Holly Dill, prepares to present the tallest mangrove seedling prize to one of the officials participating in Upclose and Ecological.

It takes many steps to organize a successful environmental education program, i.e. designing the curriculum, marketing the effort and stimulating participation are but a few. The Environmental Learning Center has prepared an outline of the steps necessary to produce an 'Upclose and Ecological' event and is happy to share their experience with other nature centers, environmental organizations, schools and communities around the world. If your organization is interested in receiving this outline please contact: [email protected] or [email protected]